Change the game with 5G

Our stores are operating under the Covid-19 Protection Framework protocols at all traffic light settings. You can also buy online, call or chat with us.

TXT/SMS scams that infect mobile phones with a virus are ongoing, so please be vigilant. If you receive any suspicious messages, don’t click links or download any apps/updates. Read more about Flubot.
Business Customer stories and insights 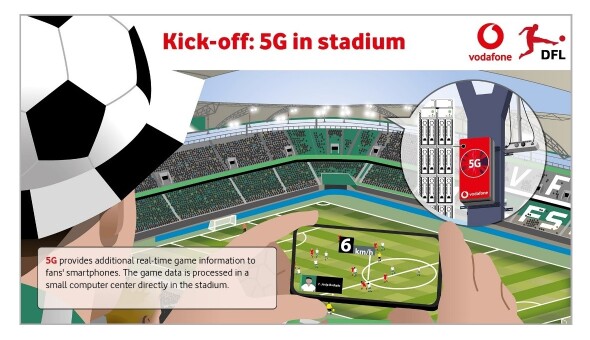 We can all relate to this scenario: being sat in a busy stadium during an intense match where every second counts, but you’re hungry. You can’t leave. You might miss something.

What if you could order food to your seat instead? Or order ahead so that you don’t have to queue?

As technology has advanced, the sports industry has increasingly struggled to entice fans to attend games. Sporting events can be just as easily watched in the comfort of your own home, where it is warm, there is a good view of the action and there are no queues for refreshments.

According to recent research in the UK, 78% of sports organisations said innovation in fan experiences will be key to future success.

And many believe 5G is a fundamental part in delivering this, with 75.2% believing it is critical in helping them attract new, younger and digital savvy fans.

As the building block for new and immersive technologies, using augmented reality (AR), virtual reality (VR) and the Internet of Things (IoT), 5G has the power to completely transform the way fans interact with teams, players and brand sponsors.

Teaming up with the Deutsche Fußball Liga (DFL) in Germany, we recently activated the Volkswagen Arena for a VfL Wolfsburg vs TSG Hoffenheim Bundesliga home game.

Selected fans were able to test a new app, developed by Immersiv, allowing them to receive information on the players directly to their smartphone.

Spectators could see statistics such as how fast a striker reached the opponent’s goal and how likely they were to play the ball – something you would usually only be able to find out after the match.

Vodafone installed 5G antennas and its own small computer centre at the arena, directly under the stadium roof which meant the data was able to reach fans’ mobile phones in real-time, processed from the edge.

Approximately 3.6 million position data points and 1,600 game events (such as goals, passes, fouls) are collected and distributed per game by the DFL subsidiary Sportec Solutions, whose expertise has been harnessed to introduce a new visual tracking system; making it possible to capture all players, the ball and the referees more precisely and automatically than ever before.

In the future, the app will allow fans to see how quickly a player is running and how successful his previous shots on goal were as the action unfolds before them.

As more and more football viewers use an additional screen to provide game data or other information, these tools become necessary to create an innovative offer for stadium visitors.

The trend goes beyond football too.

In the UK, under a sponsorship and technology deal with Wasps, Vodafone is equipping the rugby stadium and netball centre with the latest 5G and Internet of Things (IoT) technology, giving fans the best-connected sporting seats in the country.

The next generation of apps and in-stadium data analysis will allow visitors to do everything from adjust the temperature of their individual seat to finding the shortest concession lines during half-time.

Getting connected, making it personal

Soon, your experience will start from the moment you enter the car park.

Mobile and facial recognition of tickets could help arena’s instantly recognise a fan upon arrival, enabling them to give a bespoke service, such as an interactive map, sent straight to their smartphone showing a seat location, or a video from their favourite player thanking them for coming.

Using location marketing, arenas could give personalised discounts on refreshments during the game or even special offers on tickets for future events.

These multiple touch points create opportunities to turn a one-game supporter into a loyal lifetime fan, or reward regular attendance.

The stadium can also collect valuable data about fans during each visit, which can then be used for more targeted sales and marketing campaigns.

Retail, gaming and beyond

Retailers could apply similar tactics in their own stores to give their customers a personalised, technology enabled shopping experience.

With 5G, traditional high street brands have access to a whole host of innovative, in-store services such as connected shelves and goods with identification cards, not to mention better connection between stores, suppliers and warehousing logistics – think drones and driverless vans.

5G has even lead to completely new sporting events, such as the world’s first live international mobile gaming e-sports tournament in Milan, which brought together a new community of gamers.

The possibilities are exciting and endless, but it all starts with 5G.

Are you ready to change the game with 5G?

Get the latest insights straight to your inbox

Keep up with the latest insights, tech trends, offers and events